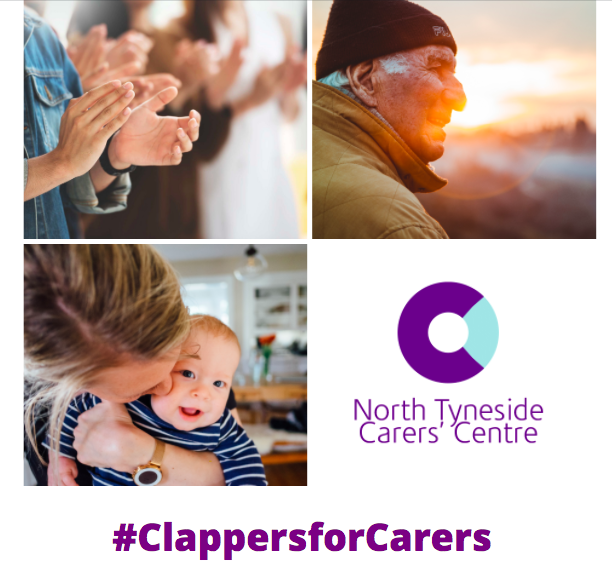 COVID-19 has hit carers exceptionally hard, with young carers struggling to get the respite they need at school and shop for the family, risking putting vulnerable members of their family in harms way by having to visit shops due to a lack of home delivery slots for example. The cancellation of vital respite services has left carers under enormous stress and strain, while being furloughed or self-employed bring further on-going challenges.

In contrast, the sound of clapping, cheering and wooden spoons hitting saucepan lids filled our hearts and our streets as carers and carers’ services across the country stood in solidarity with the NHS and key workers during the “clap for carers” weekly clap. The campaign originally began as a one-off to support NHS staff on 26th March – three days after the UK went into lockdown. However, after proving very popular, it was expanded to cover all key workers and has continued every Thursday at 8pm. While North Tyneside Carers’ Centre wholeheartedly celebrate and support the campaign, both staff and carers working with North Tyneside Carers’ Centre worried it took the spotlight off unpaid family carers due to the use of the word “carers” in an NHS context.

It has become clear that a communal clap can be credited with bringing neighbours and communities together, which is why North Tyneside Carers’ Centre is organising a standalone #ClappersforCarers event at 6pm on 30th June 2020, working in partnership with local social enterprise Geordie Clappers whose handmade devices have been a huge hit amongst local communities during lockdown.

The Geordie Clapper is a wooden device that makes a noise when shook made by Dave Thompson. Initially designed because clapping on a Thursday night began to become quite painful after a previous hand operation; the Geordie Clapper quickly became popular as Dave and his wife Sue gifted them to neighbours, family and friends to use. North Tyneside Carers’ Centre learnt about the Geordie clappers thanks to volunteer Sue Thompson. Both Sue and her husband Dave are carers, as well as Sue volunteering for the service.

When planning our #ClappersforCarers event, we knew it was the perfect opportunity to support to this fantastic local enterprise and the tenacity of carers. Sue and Dave kindly donated 52 Geordie Clappers for carers in North Tyneside to decorate for the event.

Get involved!
North Tyneside Carers’ Centre are encouraging carers, carers’ centres, professionals and businesses nationwide to get involved with the #ClappersforCarers on 30th June 2020 at 6pm – whether they use a Geordie Clapper or not – to continue to raise awareness of carers and their needs.

We’ll be creating a video of the event to share on social media and would love to see your photos and videos from #ClappersforCarers. Please email them to enquiries@ntcarers.co.uk to be involved and feel free to share our posts about the event on social media.